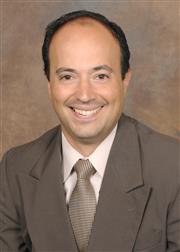 Dr. Alberto Espay is the director, associate professor and endowed chair of the University of Cincinnati James J. and Joan A. Gardner Family Center for Parkinson’s Disease and Movement Disorders (OH, USA).

He currently serves as Chair of the Technology Task Force, Chair of the Membership and Public Relations Committee of the International Parkinson and Movement Disorders Society, and Executive Committee member of the Parkinson Study Group. He is former Chair of the Movement Disorders Section of the American Academy of Neurology and former Associate Editor of Movement Disorders. He became honorary member of the Mexican Academy of Neurology in 2008, has been on the Best Doctors in America list since 2009, and has received several awards including the Business Courier’s Forty Under 40 award in 2010, the Patients’ Choice and Compassionate Doctor awards in 2011, the Cincinnati Business Courier’s Health Care Hero Award in 2016, and the Spanish Society of Neurology’s Cotzias Award in 2016. His research efforts have focused on the measurements of motor and behavioral phenomena and clinical trials for Parkinson disease.