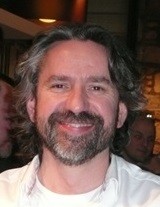 Director of Research for the School of Biology, University of St Andrews (UK)

Professor Frank Gunn-Moore studied Biological Sciences at the University of Edinburgh (UK), and then a PhD in Biochemistry at the University of Cambridge (UK). After performing postdoctoral research at the University of Bristol (UK), where he researched the signal transduction pathways of neurotrophic factors, Prof Gunn-Moore then returned to Edinburgh, and worked on identifying the protein complex that attaches myelin to neurons. In 2000, Prof Gunn-Moore started his own group in St Andrews, studying the development and survival of mammalian neurons. His approach to achieve this has been one of combining all three science disciplines, and so the group publishes in biological, chemical and physics based journals.

Prof Gunn-Moore’s group has made major discoveries in understanding the early stages of Alzheimer’s disease, pioneering new models and identifying potential therapeutic targets for the early stages of this disease. Using both molecular and novel biophysical techniques the group has also discovered novel signaling pathways that are involved in the growth and development of mammalian neurons. In addition, to overcome inherent problems with working with cells of the nervous system, the group has developed novel optical technology that allows the manipulation and imaging of these cells.

Within the University of St Andrews, Prof Gunn-Moore is Director of Research for the School of Biology, responsible for the output of 75 Principal Investigators. Externally, he is Deputy Director of the Scottish Universities Life Sciences Alliance, which previously has been instrumental in helping to attract funding including the European Lead Factory and the National Phenotypic Screening Centre. Prof Gunn-Moore also established and initially chaired the Alzheimer’s Research UK network for Scotland, and the Biophotonics Theme for the Stanford-Scottish Universities Partnership. Prof Gunn-Moore currently sits on the Alzheimer’s Society funding board, but has also sat on funding agencies such as the BBSRC and EPSRC.