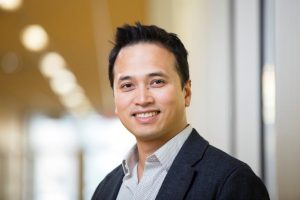 Assistant Professor, Concordia University Research Chair in Sleep, Neuroimaging and Cognitive Health; attending neurologist and researcher at the Institut Universitaire de Gériatrie de Montréal; Clinical Professor of Neurosciences at the University of Montreal and Adjunct Professor of Neurology and Neurosurgery at McGill University (all QC, Canada).

Dr. Dang-Vu earned his MD in 2004 at the Université de Liège (Belgium) and then completed his residency in Neurology and a PhD in Biomedical Science at the same university. He did a postdoctoral fellowship in the department of Neurology at the Massachusetts General Hospital (MA, USA) and Harvard Medical School in Boston (MA, USA). He completed a second postdoctoral fellowship at the Center for Advanced Research in Sleep Medicine at the Université de Montreal (Canada) and Hôpital du Sacré-Coeur de Montréal (Canada). He has won several research awards, notably from the Sleep Research Society, the European Sleep Research Society, the Belgian Association for Sleep Research and Sleep Medicine, and the Belgian Neurological Society.

He joined Concordia University (Montreal, Canada) in 2012, where he was appointed Assistant Professor in Clinical Imaging.

Thanh Dang-Vu is currently an Assistant Professor at Concordia University (Montreal, Canada). He holds the Concordia University Research Chair in Sleep, Neuroimaging and Cognitive Health, as well as a CIHR New Investigator Award. Dr Dang-Vu is also an attending neurologist and a researcher at the Institut Universitaire de Gériatrie de Montréal (IUGM, Canada), a clinical professor in the department of Neurosciences at the University of Montreal, and an adjunct professor of neurology and neurosurgery at McGill University.

The research interests of Dr Dang-Vu are focused on the interface between neuroimaging, sleep, and neurology, in order to investigate the neural correlates of spontaneous brain activity, the role of sleep in brain plasticity, the pathophysiology of sleep disorders, and the clinical biomarkers of neurological disease progression.