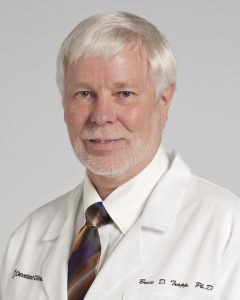 Bruce Trapp is the Chairman of the Department of Neuroscience at the Cleveland Clinic (OH, USA). His current research focuses on the pathogenesis of multiple sclerosis (MS), where his laboratory have a rapid autopsy program that MS patients sign up to in order to donate their brain and spinal cord for research. The brains are obtained very rapidly by ambulance and are taken straight to MRI, where they are examined for 2 hours. They are then transferred to pathology where Bruce’s lab processes the brains and spinal cords.

In this interview, Bruce speaks to us about his recent Lancet Neurology study on the identification of a new subtype of MS, termed myelocortical MS. He also discusses what the key challenges are in the field and what further investigation he has planned for this area of research.

What is your current research focus and what inspired you to work in this field?

Your Lancet Neurology study on myelocortical MS made the headlines recently – could you tell us more about this and how you identified this as a potential new subtype?

“In one brain, I noticed that there were no visible lesions in the white matter, so I thought maybe this was a misdiagnosis, but our neurologists do not get this wrong.”

I wouldn’t say it was by accident but it wasn’t intentionally. When we do our autopsies on MS brains, we slice the brain in a slicing box to obtain 1-cm thick slices of approximately 10 or 11 samples. In one brain, I noticed that there were no visible lesions in the white matter, so I thought maybe this was a misdiagnosis, but our neurologists do not get this wrong. The patient had MS but we were also correct in that there were no lesions in the brain. If this was observed in just one brain then it would be a curiosity, however, we went back and looked at 100 brains in our autopsy cohort and we identified 12 brains that had no visible white matter lesions at autopsy.

This gave us a unique opportunity to study the relationship between demyelination and cortical neuronal loss. If demyelination is driving it, cortical neuronal loss should be greater than typical MS where you have white matter lesions. Thus, we matched our 12 myelocortical patients with 12 typical MS patients as well as we could, as we were limited to those 100 brains in our autopsy cohort.

We examined five cortical regions that were not directly connected to the spinal cord and measured neurons that projected to the white matter in three layers (layers 3, 5 and 6) and counted the neurons. To our surprise, we found the opposite result: that neuronal loss was greater in myelocortical than typical MS. This provides pathological evidence that supports the concept that neurodegeneration can occur independently of demyelination in myelocortical MS.

The other surprise in the study was that when we carried out 2 hours of MRI and looked at the MRIs of myelocortical and typical MS patients, we couldn’t tell them apart. This was a surprise because they didn’t have demyelination. We therefore went in and found the MRI changes that were most severe (i.e., changes by T1, T2 and magnetic transfer ratio) and we did the pathology. We found that they were all myelinated. This is probably the strongest data that we could produce that indicates there is no demyelination because those should be the most severely changed. We think that the reason for the MRIs is because the patients have swollen myelinated axons and that the T1 in the magnetic transfer ratio, which are the important ones, are based on measuring free water. If you’re a swollen axon, you’re going to increase free water.

What are the key challenges to overcome in this field of research?

“There are several key challenges before us but first, this data has to be confirmed in other autopsy cohorts. Certainly, I’ve heard since we published this study that other people have found them.”

There are several key challenges before us but first, this data has to be confirmed in other autopsy cohorts. Certainly, I’ve heard since we published this study that other people have found them. Whether they’re going to be 12% or so is something that we will have to wait and see. In my laboratory, we have gone up to over 170 autopsies now and we’re still getting between 12–13%, so it’s been pretty consistent beyond the original 100.

Second, the biggest challenge is identifying these patients while they’re alive. We haven’t been able to distinguish the MRIs between the two groups. Hopefully more sophisticated examinations of those will provide some clues.

The other thing is that we can’t distinguish these patients clinically. If you look at our Lancet Neurology paper, there are four pages of clinical data on these patients but most of this data was obtained from chart review. Now we have people coming to autopsies who are part of clinical trials, so there will be much better clinical history. We hope that by tweaking MRIs, or by analyzing them and doing more extensive clinical analyses, we’ll be able to identify these patients while they’re living.

What further investigations do you have planned for this area of research?

“We’re really trying to get at the molecular mechanisms for the neurodegeneration for the axon swelling observed.”

My laboratory is interested in the pathogenesis of the disease. Currently there are two focuses: can we identify any pathways being induced that would lead to neurodegeneration in the cortex (the myelocortical patients)? We’re isolating single-cell neuronal nuclei and doing RNA sequencing to see if there are some clues there. We’re also looking at the structure of neurons in myelocortical patients and looking at dendritic spines and etc. to see if there are any changes.

The second focus is on those white matter lesions – the swollen myelinated axons. We know they’re not demyelinated but we don’t know if the myelin is normal. We’re doing a lot of confocal studies to identify the relationship between the myelin and the axons, and anything special about the axons swelling. We will also do molecular profiling of these. We’re really trying to get at the molecular mechanisms for the neurodegeneration for the axon swelling observed.

More broadly, where do you hope the field will be in 5–10 years’ time?

I think the field has done a terrific job of slowing down or inhibiting inflammatory reaction in MS. But what we haven’t done a good job of is stopping neurodegeneration. Currently, I think there will be two approaches. First is to find a neuroprotective therapy, and I think that’s where the myelocortical patients may help us. Second is a therapeutic approach on remyelination. Although that wasn’t part of this study, it’s part of what we do. We’re trying to identify remyelinating molecules that could also preserve chronically demyelinated axons from degenerating. The demyelinated state is probably the biggest cause of axonal loss, so if we can remyelinate these axons, even partially, and keep them happy to stay in the circuit and let them function for more decades, then that would be great.

We also asked Bruce what advice he would give to a new scientist in the field of MS – find out what he said here.