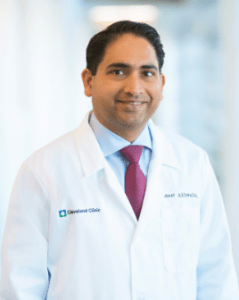 Manmeet Ahluwalia, MD, is Director of the Brain Metastases Research Program at Cleveland Clinic (OH, USA). He is also the Dean and Diane Miller Family Endowed Chair in Neuro-Oncology at the Rose Ella Burkhardt Brain Tumor and Neuro-Oncology Center and a Professor in the Department of Medicine at Cleveland Clinic Lerner College of Medicine at Case Western Reserve University (OH, USA). Manmeet’s research focuses on the development of new therapies for people with brain tumors and brain metastases. Currently, he leads several clinical trials involving immune therapy and new targeted therapies, as well as treatments targeting blood vessels and cancer stem cells.

In this interview, Manmeet speaks to us about his favorite presentations at the 23rd Society for Neuro-Oncology (SNO) Annual Meeting (15–18 November 2018, New Orleans, LA, USA), which includes his talk on a ‘Phase II trial of a survivin vaccine (SurVaxM) for newly diagnosed glioblastoma’. He also discusses the current vaccine options in the pipeline for glioblastoma, including how close we are to potentially getting a glioblastoma vaccine rolled out into the clinic.

1. At the end of last year, you attended the 23rd SNO Annual Meeting – what were your favorite talks at the meeting and which developments are you most excited about in the field of neuro-oncology?

The first presentation that I was really excited about includes a talk on depatux-m (ABT-414), which was an update on a Phase II randomized trial that was presented by Martin van den Bent (Erasmus MC Cancer Institute, Rotterdam, The Netherlands). This clinical trial focused on depatux-m alone or depatux-m plus temozolomide (TMZ), versus lomustine or TMZ for recurrent glioblastoma.

This Phase II trial compared depatux-m, which is a monoclonal antibody–drug conjugate that targets EGFR. EGFR amplification is observed in approximately 50% of patients with glioblastoma, and this strategy utilizes a Trojan horse. Patients are given the antibody–drug conjugate, where it binds to these receptors and uses them to enter the cell. This process then leads to the release of a toxin inside the cell, which then causes cell death.

“The second presentation that I was interested in included an update of the poliovirus trial. There has been a lot of interest in viral-based therapies with glioblastoma.”

This update was initially presented at ESMO in 2017 (8–12 September, Madrid, Spain) and was an INTELLANCE2 study. The update that was given at SNO showed interestingly, that patients who had an overall survival with 24 months follow-up, and along with TMZ, had an improvement in the median overall survival of 9.6 months compared to those patients treated with TMZ plus lomustine, whose survival was 8.2 months.

There is an ongoing study called INTELLANCE-1, which has finished approval and is looking at the combination of depatux-m along with chemotherapy and radiation in newly diagnosed glioblastoma. The results are anticipated later this year.

The second presentation that I was interested in included an update of the poliovirus trial. There has been a lot of interest in viral-based therapies with glioblastoma. The investigators at Duke University (NC, USA) have genetically engineered poliovirus and implanted this into patients’ brains. The genetically engineered virus then invades the tumor cells and has a propensity to go after them.

The initial results were published in New England Journal of Medicine in June 2018, which revealed that in the first titration of studies, there were things to be of benefit in approximately 20% of patients who demonstrated a 2- or 3-year survival. This seems better than the historical controls.

2. You also presented a talk at the meeting on a ‘Phase II trial of a survivin vaccine (SurVaxM) for newly diagnosed glioblastoma’ – could you tell us about the clinical significance of the findings gathered at this trial?

SurVaxM is a peptide-based vaccine that mounts a response against survivin, which is an intercellular protein that can present on cancer cells as well. In the past, we’ve seen that patients who have higher survivin expression do poorly, which resulted in earlier death. Thus, survivin is a marker of negative predictor for survival. In this trial, survivin was actually detectable in all patients that we tested. The range level of expression varied from 1–40%.

This outcome, at least in the Phase II trial, compared favorably to TMZ and Optune, the two approved modalities in newly diagnosed glioblastoma that have demonstrated a survival benefit.

3. What are the current vaccine options for glioblastoma?

“There are several options that are now combining vaccine-based approaches with immune checkpoint inhibitors and we’re going to be launching a Phase II trial of SurVaxM along with pembrolizumab in patients with recurrent glioblastoma.”

The current vaccine options for glioblastoma include peptide-based approaches, such as SurVaxM. Another approach is using dendritic cells, where you take a tumor tissue from a patient, alter it and then give it back to them. An example of a dendritic cell-based vaccine approach is DCVax®. There was a paper published earlier last year that showed patients who were treated with DCVax had higher survival compared to the historical cohort. However, one of the limitations of the study was that 90% of the patients had actually crossed over. The publication did not report on the primary endpoint of the study, which was progression-free survival.

4. Thank you for taking the time to speak to us today. Is there anything more that you would like to add to the interview?

There continues to be significant interest in immunotherapy in glioblastoma. Unfortunately, glioblastoma, despite advances in medical therapy, radiation and surgery, remains a tumor dismal outcome. Most patients survive 15–18 months after diagnosis.

There is significant interest in viral-based therapies for glioblastoma. Recently, TOCA-511, which is a genetically engineered virus that converts a program called TOCA-5SC into 5-FU (a chemotherapy in tumor cells), completed accrual of the Phase II/III trial in recurrent glioblastoma.

A study of TOCA-511 along with chemotherapy radiation is planned for newly diagnosed glioblastoma. There is a trial of the poliovirus as well, which involves a Phase II trial in recurrent glioblastoma in combination with a therapy called lomustine.

There are several trials investigating combination of vaccines and immunotherapies.