Creutzfeldt-Jakob disease (CJD) is a rare, degenerative and fatal brain disorder belonging to a family of human and animal diseases, known as transmissible spongiform encephalopathies, or prion diseases [1]. 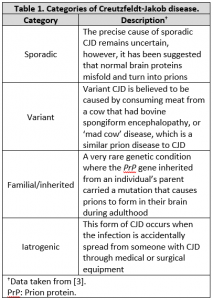 It was initially believed that a transmissible agent, such as a virus, was responsible for causing the disease. However, more recently the consensus has become that prions actually transform normal proteins into infectious molecules [2]. Although a transmissible agent is responsible for CJD, it isn’t considered to be contagious in a traditional sense.

At present, four major categories of CJD have been identified (Table 1). The most common form of the disease is termed, ‘sporadic’ and is believed to be caused by the infectious prion proteins. In the UK, the number of deaths attributable to sporadic CJD has been recorded at 28, with this number steadily increasing to 131 in 2018 (Figure 1).

Symptoms of CJD closely resemble those of other forms of dementia, such as progressive loss of brain function and mobility, slurred speech, and changes in personality. Thus, it comes at no surprise that diagnosis of the disease remains a significant challenge [1,5]. Currently, the only way to confirm a diagnosis is by brain biopsy or autopsy.

In terms of treatment options for CJD, several compounds have been trialed in human studies but unfortunately, there are no effective treatments available. In this editorial, we explore some of the treatments that have been studied in humans and take a look at what the future may hold for treating this disease.