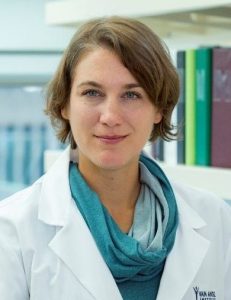 Viviane Labrie is an Assistant Professor at the Center for Neurodegenerative Science at the Van Andel Research Institute (MI, USA), where she is particularly interested in the epigenetics of Parkinson’s and Alzheimer’s disease. Viviane’s projects on Parkinson’s disease (PD) focuses on the role of the gut and its potential as a starting point for the illness.

In this interview, Viviane speaks to us about her research into the vermiform appendix as a possible contributor to PD, including why Parkinson’s might develop in only some people with abnormalities in α-synuclein aggregates in their gut and why others are seemingly resistant.

1.What inspired you to work in this field of research?

Originally, I did my PhD in psychiatric genetics and then one day, when I was doing my PhD thesis, I learned about epigenetics and how the environment can be a biological mechanism that could affect the way genes work. This was sort of a lightbulb moment and I wanted to study this further, so that’s what I went on to do my post-doc in – continuing down the psychiatric road but also including epigenetics now.

When I started my own lab, initially my focus was on Alzheimer’s disease and eventually, through my interactions with the investigators at the Van Andel Research Institute my research interests expanded to PD. Prior to this, I had done some studies on simple aging phenotypes that happen in the GI tract and it was here that I developed my interest in the relationship between the GI tract and PD.

2.You presented a talk at the Alzheimer’s & Parkinson’s Disease Congress (26–31 March 2019, Lisbon, Portugal) on the vermiform appendix as a contributor to PD, which also made the headlines in October of last year. Could you provide us with an overview about this?

We were interested in understanding how the gut could contribute to PD and I, coming from an epigenetics background, was interested in looking at some of the molecular mechanisms that might contribute to this illness. However, the GI tract is such a huge space. There is a lot of territory to cover, so where do you even start to look? From reading through the literature, I got this idea that maybe the appendix of all places could be interesting to investigate.