The Alzheimer’s Society Annual Conference, also referred to this year as the ‘United Against Dementia Annual Conference’ (21–22 May 2019, London, UK), welcomed over 600 delegates to hear more about the latest developments in dementia research, as well as health and social care. The conference also coincided with their 40th anniversary and a timeline of important milestones was on display in celebration, which can be found below.

Over the two days, we heard various talks across many key areas surrounding dementia, ranging from social care and public health, to everyday technology, sex-specific differences and challenging the dialogue on dementia. In this report, I’ll share with you some of my key takeaway messages from the conference. 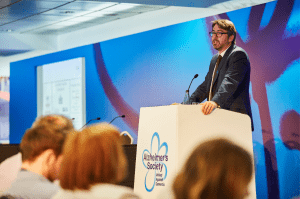 I think everyone can agree that the need for a dementia cure is crucial, however, finding care solutions to benefit people who are currently living with dementia is also equally important. According to David Sharp (Imperial College London, UK), less than 5% of dementia research worldwide focuses on care.

In light of this, the UK Dementia Research Institute has launched a new Care Research & Technology Centre at Imperial College London, which will investigate new and fundamental questions on how to better support people with dementia, particularly so they can live safely and independently in their own homes for longer.

Some of their developments include utilizing a artificial intelligence, robotics and sleep monitoring in order to meet the goals of their research, which include: i) personalize care and make it more timely; ii) improve health autonomy; iii) identify and respond to risks in the environment; and iv) improve communication.

However, with the use of technology comes many questions – what if the data is being monitored inappropriately? Will there be issues with how this data is being used? Who will have access to this information?

The team at the UK Dementia Research Institute want to develop a ‘data box’ system that stores this type of information more safely and gives users more control over it. Essentially, the information collected will be shared into a cloud system, and advanced artificial intelligence will pick out patterns of developing problems (e.g., detecting signs of disease progression or infections).

The output of the system is, in part, the ability to detect when something bad is happening and to make intelligent, personalized interventions and advice for the individual. With person-centric approaches becoming more prominent in multiple angles of research, I’m excited to see what’s in store for care research and technology!

Although the use of the brain scan is recommended in the UK, it will be interesting to see results of any bigger studies that take place to examine whether participants prefer the heart scan over the brain scan.

An overlooked majority – women and dementia

Did you know that worldwide, more women are affected by dementia than men, with the numbers of women who have dementia outnumbering men by 2:1 [1]? Frances Quevenco from the Women’s Brain Project presented information that illustrated some of these differences in Alzheimer’s disease (AD).

One area that can be seen as controversial includes how pregnancy may affect the risk of Alzheimer’s. Quevenco described how potential female-specific risk factors might include early menopause, hypertensive complications during pregnancy and pregnancies themselves. The latter is seen as the most controversial, as there are studies that implicate that increased numbers of pregnancies increase AD risk and others that say the opposite.

It was also mentioned during this session that sex-specific differences offer opportunities for precision medicine. For example, in one investigation, women were reported to perform better in verbal memory tests compared with their male counterparts. Thus, it was suggested that for cognitive assessments, it may be best to look at which cognitive test is better for certain genders.

Moreover, Quevenco also provided examples in the literature that suggest that there is a faster disease progression in women (two-times faster than men), and studies have also indicated that sex differences in biomarkers are also present, with one study indicating that tau accumulation is different between the two groups.

Overall, the link seems to be convincing. But how do we go forward with this information? According to Quevenco, we need to move from a ‘one-size-fits-all’ approach to precision medicine. Sex and gender must be considered in dementia awareness campaigns, policies, early diagnosis, clinical trials designs and brain research.

Another highlight worth mentioning was regarding new treatments for dementia. One particular talk that I was interested in was titled, ‘Altered astrocytic insulin signaling: implications in AD’, which was given by Claire Garwood (University of Sheffield, UK).

Claire mentioned how studies have shown that there are changes in insulin/IGF1 signaling in astrocytes in AD. She also indicated that these changes in insulin occur early and there is evidence that suggests that insulin resistance will alter disease progression. Moreover, IGF1 signaling impairment seems to demonstrate that astrocytes are less able to cope with stress, and this could model what happens early in AD. Thus, restoring astrocyte function could be a viable treatment option.

Click here to read more about Claire’s research into these findings.

Claire’s talk then went on to focus on her current research, where she has investigated the impact of Aβ on astrocytes and found that adding Aβ led to mitochondrial change. In addition to this, adding Aβ to astrocytes resulted in an increase in insulin signaling. According to Claire, this observation wasn’t seen with IGF1, thus it’s specific to insulin. Overall, her data implied that if astrocytes can’t signal through IGF1, then they’re less able to cope with stress.

What are the potentials for everyday tech to support better dementia care?

Technology seemed to be a theme that was prominent throughout the conference in multiple talks. In contrast to the session on care research and technology from the previous day, this session focused on the impact of everyday technology (e.g., smartphones and prompters) to support dementia care, rather than artificial intelligence and robotics.

Claire Lancaster (University of Oxford, UK) was the first speaker in this session and she spoke to us about GameChanger and whether smartphones could transform the detection of early AD.

If you’re not familiar with GameChanger then I highly recommend that you get involved. It’s a smartphone application that lets people play brain games 5 minutes every day for a month. The tasks in the game are targeted at the cognitive processes and underlying brain regions first vulnerable to change in AD. You don’t need to be living with dementia to play it either!

In the application, the user is introduced to three tasks: the gallery game, which is a paired-associate learning task of long-term episodic memory; the tilt task, which is a measure of executive function; and story time, as connected speech or discourse is identified as an important preclinical marker of AD.

Being one of the 16,000+ participants in the game, I was eager to hear more about what the next steps are. Claire concluded how everyday technology can provide scalable, frequent measurement with the application, specifically targeting the preclinical phase of AD. GameChanger participants will also be followed up longitudinally to understand how performance on the application changes over time. Additionally, in the coming months, the researchers will investigate how risk factors for cognitive decline associate with performance in the application.

Although I can say for certain that I don’t remember any images associated with the gallery game, I’m excited to see where this technology will head and I’m looking forward to playing more brain games every day!

Challenging the dialogue on dementia 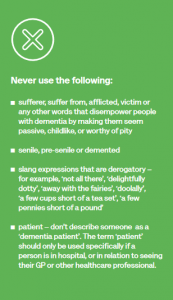 Multiple panel discussions took place across the two days but one that really stood out was the discussion on the dialogue used when speaking about dementia.

There were plenty of examples in the media about how dementia has changed over the years in how we’ve talked about it and reported on it. However, instead of repeating these examples, I wanted to reiterate the importance of what this session means in terms of why it’s important to use positive language when talking about dementia.

A great excerpt from Alzheimer’s Society on positive language hits the nail on the head with this one:

“For those living with dementia, using words or phrases that label, belittle or depersonalize people can have a big impact on them and their family and friends. It changes the way they feel about themselves, shaping their mood, self-esteem, and feelings of happiness or depression. It can also change the way other people think about dementia, and increase the likelihood of a person with dementia experiencing stigma or discrimination.”

“On the other hand, using positive language – words and phrases that empower people, treat them with dignity, and respect them as individuals – can change how society views and treats people with dementia. It can make people feel valued and included, and contribute to changing the landscape of dementia.”

I’ve included an image from their excerpt that explains why we shouldn’t use certain terms like ‘sufferers’ and ‘patients’ when talking about people who have dementia. Changing the dialogue on dementia requires action from everyone, not just those affected.

The Alzheimer’s Society Annual Conference was a fantastic event to attend again, with a whole array of people coming together to be ‘United Against Dementia’ for Dementia Action Week. From research all the way to health and social care, the conference has shone a light on the importance of prevention and finding a treatment, but also, the organizers have put a spotlight on the people who are currently living with dementia and the care they deserve.

[1] Alzheimer’s Society. Why is dementia different for women?
www.alzheimers.org.uk/blog/why-dementia-different-women
[Accessed 30 May 2019]