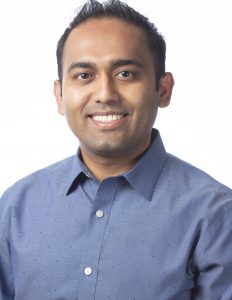 ya is a third-year postdoctoral scholar working with Professor Sangram Sisodia at the University of Chicago (IL, USA). He started his PhD in the field of Parkinson’s disease, where his dissertation focused on the microbiome gut–brain axis. Hemraj is currently utilizing his PhD as a basis to implement his expertise in this area to examine the microbiota gut–brain axis in Alzheimer’s disease.

In this interview, Hemraj speaks to us about his work that was presented at SfN Neuroscience (19–23 October 2019, Chicago) on the sex-specific effects of microbiome perturbation on cerebral amyloid-β amyloidosis and microglia phenotypes in an Alzheimer’s transgenic mouse model. We also wanted to find out more about how these gut microbiome changes might be affecting Alzheimer’s pathology in a sex-specific manner and whether these changes observed were causes, rather than effects, of differences in health.

1.Can you tell us more about your work on the sex-specific effects of microbiome perturbations on cerebral amyloid-β amyloidosis and microglia phenotypes in an Alzheimer’s transgenic mouse model?

“When these male and female mice received antibiotic treatment to alter their gut bacteria, we saw different microbiota taxa present in both groups. These readouts correlated strongly with brain readouts…”

In 2017, I started working with Professor Sisodia at the University of Chicago and in the last 2 years of the research studies I was focusing on exploring the role of gut bacteria in Alzheimer’s pathology, specifically considering sexes because we know that women – for an unknown reason – have an increased risk of Alzheimer’s disease. For me, I was really interested in finding out what happens when we changed the gut bacteria in female Alzheimer’s mice and whether we see the same response in male mice.

When I joined this lab in 2017, we already had a great study published by a previous postdoc in the lab that demonstrated that when we changed gut bacteria using antibiotics, male Alzheimer’s mice had reduced pathology. This was explored in female mice, however, there wasn’t a deep analysis included. Thus, I wanted to carry that forward in my studies and when I started working with the APPPS1-21 transgenic mouse line of Alzheimer’s disease, I started to include both male and female mice.

At present, we are trying to connect the dots – are these bacteria in female mice treated with antibiotic, at pro-inflammatory milieu, which put the female mice for not having reduced beneficial effects as in the male mice? That’s something we are working on right now, but we clearly see a sex-specific effect of the gut microbiome on Alzheimer’s pathology in this second paper, published from the Sisodia lab.

2.In your opinion, how might these gut microbiome changes be affecting Alzheimer’s pathology in mice in a sex-specific manner?

Currently, the paper that we have published in the Journal of Experimental Medicine demonstrated that we were able to establish a strong causality between gut bacteria and Alzheimer’s pathology. When we treated these mice, they were in the pre-weaning phase – so male and female pups were living with their mothers in the same cage. When we administered the antibiotic to male and female mice, they went through the same changes in their gut microbiota during the pre-weaning phase. At the time of sacrifice, they started to exhibit different microbiota profiles.