In a culmination of work that began over 20 years ago, inspired by visits to remote tropical islands, last month saw the publication of a study providing the first strong evidence for a link between exposure to an environmental toxin, termed beta-N-methylamino-L-alanine (BMAA), and Alzheimer’s-like pathology in the brains of both humans and animals.

Although associations between environmental toxins and neurological conditions are not a new phenomenon or suggestion, especially for lead author and renowned ethnobotanist Paul Alan Cox (Brain Chemistry Laboratories, Institute of Ethnomedicine, WY, USA), the findings highlighted new questions regarding the role and contribution of our environment to progressive, neurodegenerative disease and potential implications for Alzheimer’s drug development and prevention.

I gave Dr Cox a call on a grey January afternoon in London, the antithesis of Guam, the Pacific island at the heart of the study, to find out more about his extensive career investigating diseases of indigenous populations as well as the findings of this recent study.

Cox’s ethnobotany story starts with his PhD in evolutionary biology at Harvard University (MA, USA) where he was approached by the prominent ethnobotanist Richard Evans-Schultes. “When Professor Schultes discovered that I spoke several Polynesian languages he really encouraged me to do ethnobotanical research,” said Cox. “I began doing this on a weekend basis… But when my mother passed away from breast cancer I decided to try to focus my career on ethnobotanical drug discovery.”

As a new Assistant Professor, Cox was lucky enough to receive a Presidential Young Investigator Award from the National Science Foundation that allowed him to take a sabbatical, along with his young family, to Samoa to study the indigenous healers of the island.

His belief in the importance of studying indigenous diseases as a basis for drug development was reinforced during this period and led to successes such as the discovery of prostratin for HIV/AIDs treatment amid the crisis of the 1980s. “After we announced our discovery of prostratin as an anti-HIV/AIDS drug candidate, and I saw that it was moving through the pharmaceutical pipeline, I wanted to find another problem that had that same sense of hopelessness and despair that was felt within the HIV/AIDs community.”

Cox chose amyotrophic lateral sclerosis (ALS), or motor neurone disease (MND), and headed off to the island of Guam to study the unusual neurodegenerative disease of the Chamorro villagers, a disease previously identified as amyotrophic lateral sclerosis–parkinsonism/dementia complex or ALS/PDC. “[We wanted] to try and figure out why the Chamorro people suffered from this illness, which combined aspects of Alzheimer’s disease, ALS and Parkinson’s, particularly since other people on the island, Carolina islanders, Filipinos, Japanese, US military personnel, didn’t seem to be affected.”

“I was struck that although the disease seemed to be centered in several villages, there was no clear pattern of inheritance,” explained Cox. Previous studies had also highlighted that while non-Chamorro people generally did not suffer from the disease, individuals that married into a Chamorro family and adopted their lifestyle then became at risk.

In addition to this, immigrants from Guam to California exhibited patterns of disease development 10–15 years after departing the community. “Ralph Garruto and his colleagues at NIH found that the disease had a long period of latency, and that while it was centered in households there was no clear pattern of inheritance, suggesting that there was probably a common environmental exposure that caused it.”

This environmental exposure was to the neurotoxic non-protein amino acid, BMAA. Cox’s studies have since indicated that the toxin is produced by cyanobacteria contained within the roots of the native cycad tree and passed to the Chamorros through the use of cycad seeds for flour, as well as through bioaccumulation in their food higher up the food chain, resulting in biomagnification of BMAA of up to 10,000-fold from its original production. 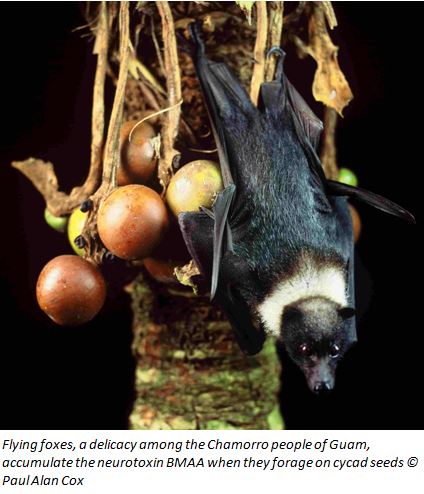 Cox and his team were able to analyze postmortem brain tissues of Guam villagers, ‘healthy’ North Americans and North Americans that had died of Alzheimer’s disease, for signs of BMAA. Their results highlighted the undeniable presence of BMAA in the brains of Guam natives, linking to previous findings that had identified neurofibrillary tangles in brain tissues of Chamorros that were structurally and histochemically similar to those seen in Alzheimer’s patients.

Amyloid plaques were also found in the brain tissues, although these are more sparsely distributed than generally seen in Alzheimer’s disease. In contrast, BMAA was not present in the brains of ‘healthy’ North Americans; however, it was detectable in postmortem samples from individuals with Alzheimer’s disease, suggesting a link between the toxin and Alzheimer’s development.

The question on everyone’s lips was therefore then, how are individuals in North America being exposed to BMAA thought to be limited to Guam?

In 2005, Cox and other researchers published research in PNAS demonstrating that 95% of cyanobacteria they studied from a range of morphological groups produce BMAA, meaning that exposure to BMAA is possible throughout the world.

The results of these studies led to a new collaboration with Deborah Mash at the Department of Neurology, University of Miami (FL, USA), who had also independently replicated the findings of the analyses of brain tissue BMAA in Alzheimer’s brains, and had extended these to ALS patients.