In September, we celebrated World Alzheimer’s Month! Join us as we honor those affected by dementia, as well as celebrate the scientists, clinicians, charities and fundraisers working to beat the disease.

Our #VoicesForDementia campaign features those affected by dementia, those involved in research, and individuals from our partnered charities. We posed a different question to each person, which can be found at the start of each video.

So take a look at our #VoicesForDementia below, get sharing, and join the fight to defeat dementia! 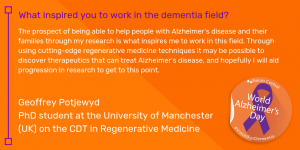